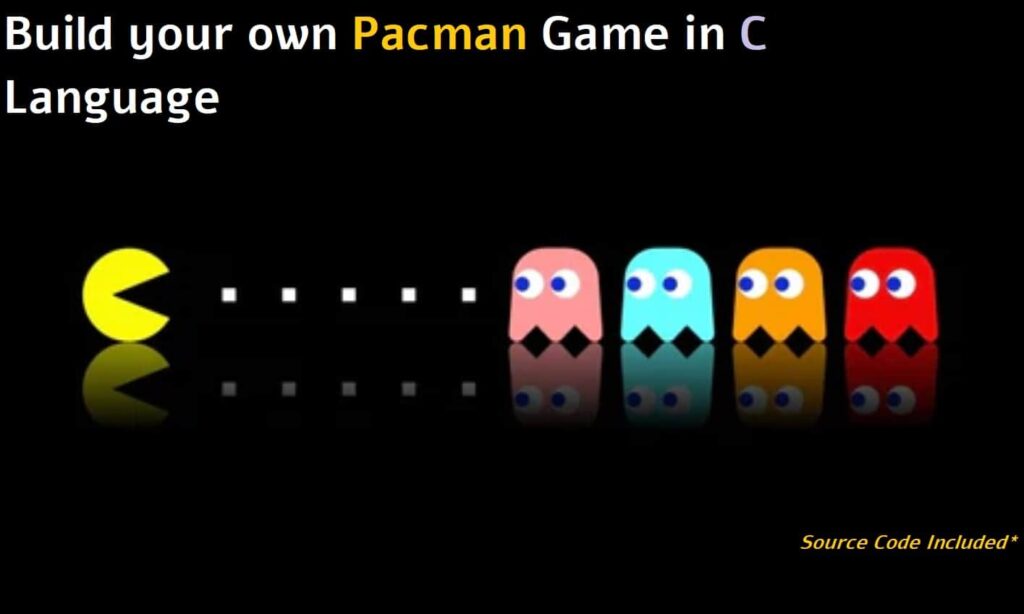 In this programming tutorial, you will find out how to build a simple Pacman game in C code. To make the project easier, we have included the Pacman source code which you can download for reference and guidance. And of course, you can simply copy and paste it!

Pacman is a popular game that came out in May 1980 and then in October it was released in America. It has a yellow, pie-shaped Pac-Man Character, that you move around a maze map. Since the 1980s till now it is an icon and remains popular. It has an innovative design which has been the focus of different books and academic articles.

Why we choose C to build the Pacman game project?

The main reason why we are building the Pacman game in C is because of the rich functions and agility this programing language offers. The other reason is the versatility of IDEs available for C that you can use for free to edit and compile the code. Functions such as m_up, m_right, m_left and m_down are key to making this game work properly and C offered these along with the computer graphics library which is a crucial piece.

How Pacman Began and the Pacman Fever

Pacman was created by Namco in Japan and released in the US by Midway. In the year 1981 around 250 million Pacman games were played in the US. It has been released nearly on each platform of the video game. In the year 2010, Google Doodle in a playable version to mark its 30th anniversary.

It comes with different references to food: Pac-Man chomps at pills in his path as well as consumes onus items in the shape of fruits and power pellets which are in the shape of cookies.

Puck-puck Japanese is onomatopoeia for munching, and the original name was puck-man which got changed for American arcades.

The game itself was loud and the machines were also located in noisy yet congested places. Many towns in the US wanted a restriction on this. Des Plaines and Illinois banned under 21 from playing video games unless and until their parents accompanied them.

If we talk about other cities then they used licensing or even zoning to limit the playing of video games. A license to run an arcade could stipulate that it needs to be a certain distance from school and could also not sell food or even alcohol.

The game saw a lot of popularity within a year and there were many spin-offs being created and released; among these many were even authorized. The most popular was Ms. Pac-Man which appeared back in 1981 and was not an authorized version of the game.

It was created by Midway which was the very same company to sell the original games in the US. It comes with four different mazes with a different number of dots, compared with its 240 dots only: Ms. Pac-Man maze walls, dots, as well as pellets come if different colors and the ghost colored in orange is named as Sue not Clyde.

Some other notable spin-offs include Paman Plus, Junior Pacman and Pacman World. It was available on home computers, game consoles as well as hand-held devices by the mid-1990s.

How the Pacman Game is played

It is played either with keyboard arrows or a joystick (originally), the main purpose is to move it around the maze-like screen in order to consume lines of 240 dots and avoid or even attack one of four hunting ghosts.

Now the ghosts come in four different colors which is red, light blue, pinky, and orange. Now, each ghost has a different strategy like blink is at times called shadow as it moves quite fast among other options. When the game starts these ghosts leave the ghost cage in the center of the maze and move around the board. Whenever Pac-man hits the ghosts he loses a life and the game restarts.

On the corner of each level, you shall have four power pellets if Pacman is able to gobble one of these then the ghosts turn dark blue in color and can be eaten by it. After this, the ghost disappears and its eyes run back to the cage and reform to fight again. For additional points, you can gobble up different fruits and other objects. Now how the game ends? Well, when Pacman loses all his lives the game actually ends.

Follow the steps below in the order they are to create your own Pacman game in C code:

You can further improve it by adding OpenGL support, adding custom mazes, or even changing the characters. Are you up for the challenge? 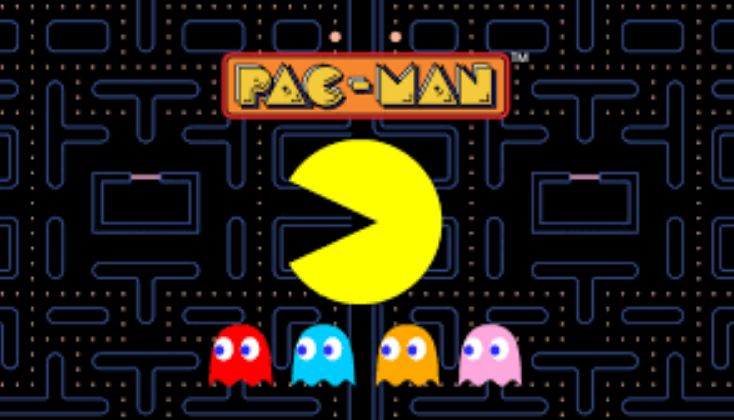 Pacman is not a complex game by any means! However, if you are a beginner and are looking for a simple way to build it, then having the code will benefit you. This is where the Pacman source code download will help you in already having a structure, code skeleton and functions in place to build. Later on, you can also improve, adapt and add to the C code such as adding more colors or changing characters. The sky is the limit.

Other fun projects with source code you can use for free:

Yes, we have created this code for you in C and is for you to test, use and edit as you wish all for free!

Can you also build Pacman in Python?

Python is a well capable language and you can certainly also build Pacman in Python using modules such as Pygame and using the Random library.

Is C the original language Pacman was built with?

Unfortunately No, Pacman was originally developed in SDL2 library with C++. Our source code is a demonstration of the capability of using the C language to build games.