Though CPython compiler (-cum-interpreter) is the default python compiler as it belongs to the reference implementation which is CPython, we have a list of free Python compilers that can allow more flexibility and are easy to use for newbies.

What are compilers used for? (The obvious)

Why are compilers different then IDEs?

The most simple difference between an integrated development and a compiler is that compilers build the code whereas IDEs create the code. Get it? IDEs have all the tools, programming language support and extensions to help you write the code, to put it together is where a compiler comes in. Learn what is an IDE and the main benefits it provides to a coder.

6 Python Compilers that are easy for beginners (Online/Offline)

This one is a source-to-source compiler that takes Python code and then compiles it to C or C++ executable or even source code. This can be used to develop a standalone program even when it does not run on the machine.

It is written in Python and allows using different Python libraries as well as extension modules. We can find this for FreeBSD, Linux, MacOS X, NetBSD and Windows platform. The best thing about this is that it is licensed under Apache License version 2.0

If you need to this to develop projects which involve data science and machine learning this it is available for Anaconda too.

SEE ALSO: How to learn Python fast if you have no programming experience.

This has a lot of popularity among users and is usually labeled as “Python 3 implementation for client-side web programming”. It is being used to convert python code into JavaScript code. It is adapted to the HTML5 environment and carries an interface to both DOM objects and events.

For those who don’t know it is a contraction for browser Python. It is rich in features such as creating simple document elements, drag and drop to 3D navigation. Its performance is much better in Firefox than in Google Chrome.

It provides support for both modern and mobile web browsers. It carries a JavaScript console which is used to evaluate the execution time of a few JS program as compared to its equivalent Python in the editor.

It is much faster when compared with Pypy.js and Skulpt. In some cases it is even speedier than the Python reference implementation which is CPython.

It usually provides support to syntax of Python 3 like comprehensions, generators and imports. Moreover, it is also used to give support to many modules which belong to CPython distribution and carries libraries that are used to interact with DOM elements and events.

It supports the latest specs of HTML5 or CSS3 and python compiler can also use CSS framework such as BootStrap3 and LESS. 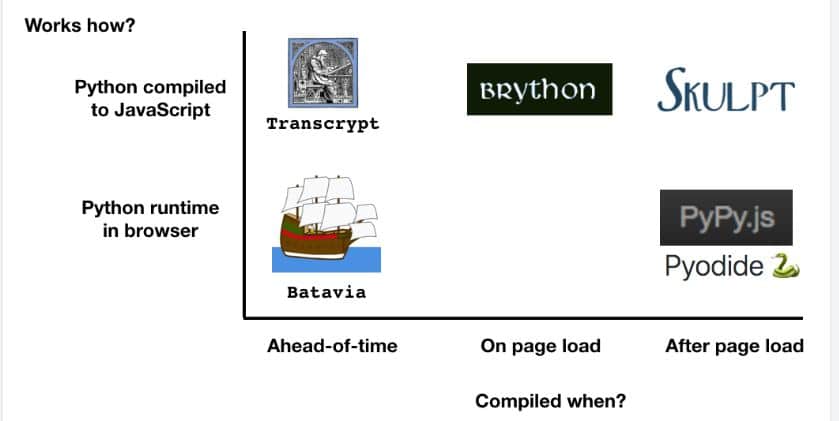 It is written in JavaScript and is there under MIT license. This one provides users with a genuine environment where code is executed in the JS form.

You do not need any additional processing, plug-ins, or server-side support which is required to run this in the web browser as it is an in-browser implementation of Browser. Code which is written down in this is executed in the web browser directly.

For developer, this is a great choice if they are looking for a web app which allows running Python programs with the browser, in this background servers are kept secured. This can be embedded in a blog or web page as well quite easily.

This can be added in HTML for custom integration. Moreover, we can teach this on how to import custom modules to have more and more control. Though it translates Python code into JS code it does not provide any kind of facility to run the second option.

This is another option on the list which is used to convert a typed Python program in an equivalent and pure C++ program. For those who do not know statically typed means that variables used should only infer to a single data type.

One downfall is that it does not provide any kind of support for common features like using nested functions and defining functions that are able to accept different documents. With shed skin only standard Python library functions are available.

With this users can also translate statically typed Python programs into optimized C++ code with many limitations. Moreover, it also scales well.

If it carries an unsupported module that is required in your code then what you need to do is remove it and then add plain code to replicate and desired function.

It is able to generate standalone programs or extension modules despite its experimental status which can be then imported and used in large programs of Python.

One great advantage of this it provides with a great performance boost. This is because of the fact it has reimplemented in-built data typed into its very own set of classes which are implemented in C++ code.

This is a Python distribution that is designed primarily for Windows OS. Its last version was not that designed in a good way for windows also carried bugs. It was incubated as a solution to the issues.

Though the current iterations carry stability with windows OS it has rich in features. It required users to only download and unpack it to begin.

It is pre-packed with popular data science and machine learning Python libraries like NumPy, Pandas and SciPy thus allowing users to directly work with these.

It has many features which in many cases are not needed such as C and C++ compilers. This however can be a limitation as users then have no option to select and download only those features which are needed.

It is there for the zero package option which comes with the compiler. 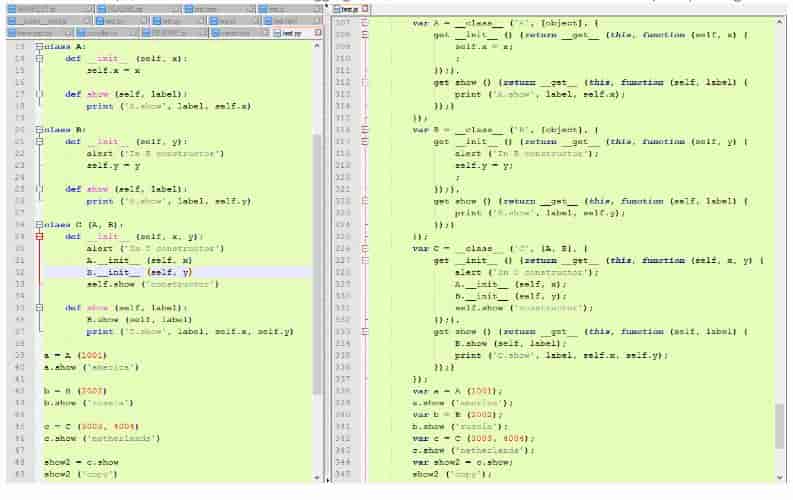 This is the least popular option on the list through which we can compile the executive subset of Python into a compact, readable and easy to debug Javascript code. The best thing is that it follows quite a simple yet powerful syntax without the need to have any additional features.

It pre-compiles to fast yet readable JS code which can be debugged from the source by using source maps. Python compiler which is light in weight provides support for slicing with [i:j:k] matrix and vector operations with +,-,* as well as / operators.

It is also able to boast a flexible and stable structure overall all thanks to providing support for hierarchical modules, local classes as well as multiple inheritances.

Compilers play a crucial role in building the .exe or .msi or any executable file, they are building the code that worked hard to write! This is why it is important to pick the right compiler while writing Python code. We can personally recommend Nuitka as it supports C and C++ along with using fewer system resources.