Rust is a statically-typed programmed language. It is preferred by developers when they have to interact with hardware on a low level. Rust has been designed primarily for performance and safety, especially safe concurrency and memory management. The syntax is quite similar to that of C++. It is open-source and free to use by anyone for any project. Rust is preferred because of the 4 main traits below:

If you are a die-hard Rust programmer and are struggling to find an IDE to meet your needs, we have you covered! These 5 best Rust IDEs are versatile, free, and help you code better. We have also included Rust text editors that you can use with compatibility for Windows, Linux and Mac if you are a Rust application developer.

4 Reasons to use Rust (Pros and Cons)

If we summarise why you should use Rust programming language in the first place, below are 4 reasons that make it clear:

We have also compared the Pros and Cons of Rust in the table below:

Rust is used in conjunction with the match expressions to give more control over the control flow of the program.

When two or more threads are having access to the same memory location then this condition is known as a data race. It provides threads without data races due to the ownership system. Such systems are used to transmit only owners of different objects to different threads and two threads can never own the same variable with write access.

This means that rust language can be able to interoperate with the C language as it talks to itself. It also provides with foreign function interface in order to communicate with C APIs and leverage its own system to guarantee the safety of memory at the very same time.

Integrated development environments are essential for developers to write Rust code. However, there aren’t enough or many dedicated IDEs created to suit Rust. We have selected the most useful and practical Rust IDEs and text editors and added them below for you: 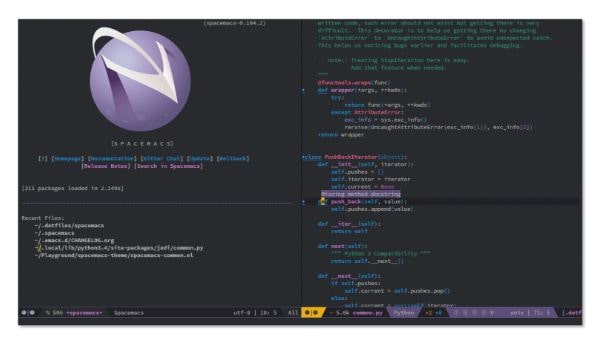 This is quite popular among users and makes it possible to link more than one project even if the scenario is that you don’t use workspaces. It also comes with a toolbar on which you can see the status of the project. It carries all most all the features like native code completion, broad navigation, formatting, intentions and much more. Other than this it also has preliminary debugger support.

This is used for programming in Rust, what great is that it provides all the developers with basic features like auto-completion, error detection and correction, moreover it has other major features which include community-driven configurations, maintaining two different key binding systems and community-maintained layers.

It comes with an extensible yet customizable text editor which is used to combine both Vim Editor and Emacs taking the best features from both of them and then providing them together as one. So, to operate this you first need to install Emacs. 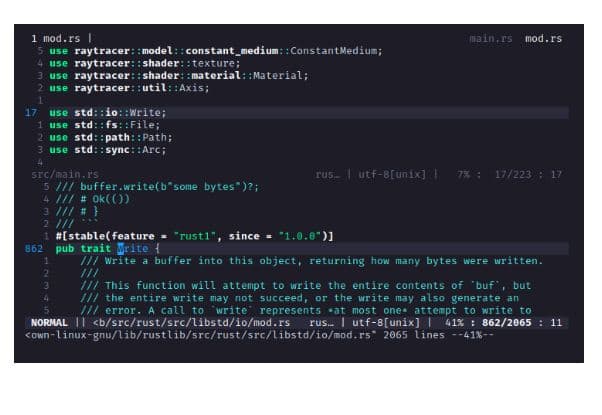 This is both a great version and a successor to VIM IDE. It has many powerful features like key bindings and modes, editing documents where to want to, complete customization and modularity with plug-ins. Moreover, it comes with various plug-ins which are used to both enhance or change the core vim behavior and get better results; the important ones include Tagbar, FZF, Nerdtree, Neo-complete and many others.

To make Rust work with Neovim the following are also needed:

Atom is not originally designed to work with Rust and it can’t understand its code by default. You have to install the “Rust Analyzer” extension so that it can highlight the syntax properly for the .rs files.

The other benefit of using Atom for Rust code is that you can install your own themes. A popular one is Rusty Dark Syntax by Nercury.

This is yet another option on the list which is an eclipse IDE for rust. It comes with a base workspace and an extensible plug-in system which is used for customizing the environment. It is open-source and comes for free. It provides you with RCP which is a Rich Client Platform that is used for the development of general-purpose apps.

4 Extremely Useful VS Code Plugins you need for Rust Code

Do you know all versions off the top of your head when you need to add in a new crate? Well, we don’t, so you need to have a default backup to crates.io. This however is a minor issue for which time is required. The extension search in the top of crates.io is used to help with this.

For example, if you install awesome-rust from crates.io. It will bring you the most commonly used and popular frameworks for Rust. Alternatively, you can also search for crates that provide support for other programming languages such as Python.

Rust-Analyzer – A frontend for Rust 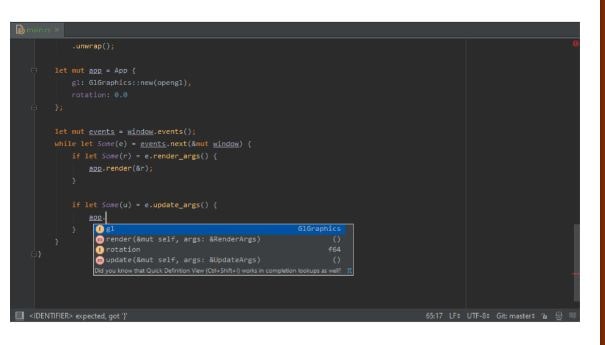 If we suggest you get only one extension it sure is this one. It provides you with unique features which you may already be familiar with in Visual Studio Community. Some of these are listed below:

It is editor agnostic by default and also runs in the background. It runs as a language server within the VSCode. Being IDE-agnostic there are many packages available for other editors.

This one is seemed to be a big booster of productivity as it minimizes the number of times you need to switch between the editor and command line in order to compile your code. Instead, you get feedback in place while you edit.

Now, what happens when you open ninja-ide.toml file in VS Code? Well, you look at the file without any syntax highlight. Now, for the .toml files, there is no out-of-box control. So, adding TOML language will help make these files more readable.

The error lens is used to provide visual aids in your editor, how? Well by making errors stand out. What it does is highlight the complete line where diagnostics are created. When issues occur with a Line of Code, it gets highlighted and catches an eye immediately.

Other IDEs you should check out:

Rust has a variety of IDEs that you can use to write/compile your code. However, which to choose should now be easier with the 5 best Rust IDE compilation above which also includes plugins and extensions including rust-analyzer and error lens that allow other non-supporting text editors such as Atom the ability to read and display Rust code. So, which IDE are you using for your Rust projects? We are eager to know…