For those who don’t know, coding is a process in which we transform ideas, solutions and instructions into a language that is understood by the system. This is a binary machine code. In simple words, this is how to talk to computers and the hardware inside. Today, we have the 7 best coding apps you can use on your iPhone for free! These allow you to edit Java, C++, HTML, CSS and even Python.

As it is used to create an instruction set of instructions for the system to follow, these are used to determine what actions can and can’t be performed by the system. If you are a programmer then you can build programs like sites and applications. There are also various types of coding that include:

Is it reasonable to code from your iPhone?

Yes, it is if you only need to edit minor source code and make minor changes. If you are looking at the iPhone as your go-to device to build enterprise-grade apps or programs then this is not recommended. The reason behind this recommendation is that you are bound to a less powerful computing platform and OS.

For instance, the iPhone 13 Pro Max has a 6.68-inch screen and you will be only able to see so much code. The processor is also a Hexa-core and has limited capabilities when compared to a desktop process such as an Intel Core i7/i9 or an AMD Ryzen with 8 or more processing cores.

If you really have to make a minor change while you are on the go that can fix a major outage, an iPhone is a great device for that.

As many developers use Xcode and Sublime text on their Macs being popular fewer realize that iPhones are also able to handle coding applications quite well. Though they may not be as powerful as their desktop counterparts yes there are few which are capable mobile IDEs and surely act as a powerful supplementary IDE for the primary device. 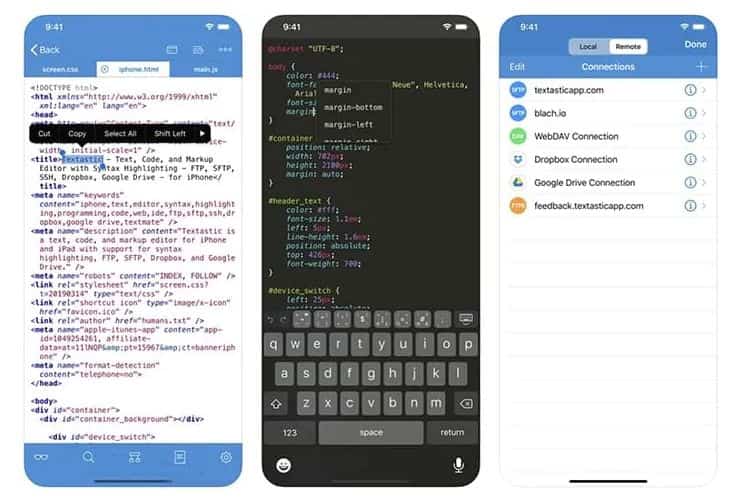 You shall find it on iOS and iPadOS and provides support for more than 78+ languages. The best thing is that it has compatibility with TextMate and Sublime Text 3 syntax definitions and themes.

It is rich in features like fast speed and is built on native iOS and iPadOS APIs like Core Text through which you can perform complex operations quite easily.

It shall provide you with many options to import files and then export them, support external keyboards, and comes with cursor navigation for the selection of easy text. These are all the reasons why it is the best application.

Buffer Editor – An IDE you can customize with themes

This shall provide you with a purposely built-in development environment that will not make your iPhone run out of battery quickly and eat all of its resources while compiling code! Use this with the assurance that all your needs as a developer shall meet.

It comes with an interface that is customizable and lets you easily switch between themes just like Atom Editor does. The best thing is that it has been highly optimized for iPhones providing support to different operations.

Moreover, it provides support to connections to GitHub, BitBucket, Dropbox, Google Drive, SFTP and even SSH servers. It comes with syntax highlighting and code-complete for many languages. You can also preview the code by using Safari and many other types of file natively supported by iOS.

Swift Playgrounds – Learn and code at the same time 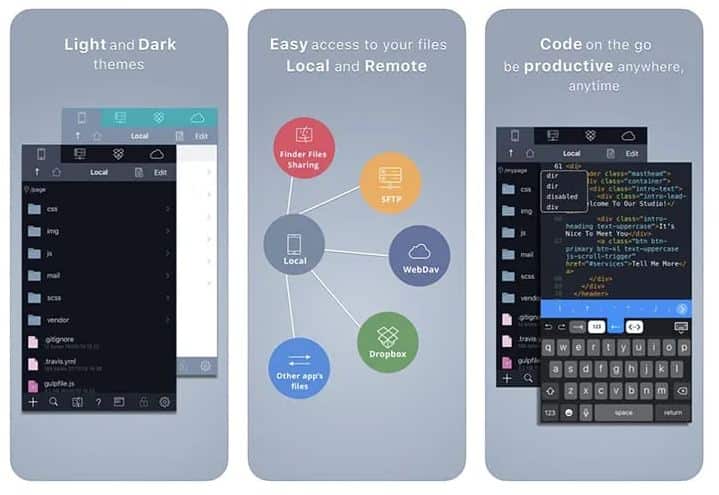 This application is amazing for both a newbie and an experienced developer. It started with Apple’s initiative to make it fun learning and it has grown over the past few years. In this, you shall see many different ranges of lessons that shall help you to catch the essentials of coding by solving puzzles in an interactive 3D world.

For coding it shall provide you with a blank canvas on which you can practice, inspect as well as code something from the scratch. Moreover, it also integrates with iPadOS frameworks and allows submitting your application to Apple’s application store. It only comes with a downside that it is available only for iPhones.

This is a complete Python editor for coding on iPhone. As developers of Python would have familiarity with standard libraries provided, its benefits include the ability to interact with native iOS features such as location data, contacts, reminders, pictures and much more.

With this, you can expect to have desktop-level features which include syntax highlighting and code completion and outline view and support for different tabs. It also comes with a powerful interactive prompt through which you can try code snippets instantly or even perform ad-hoc calculations. It supports color themes, and a custom keyboard and also comes with a system of snippets to speed up the process of coding.

This is a fully-baked development environment that has been built especially for iOS. It provides support to more than 71+ programming languages, syntax highlighting and auto-complete thus making it a powerful application. It is more like a bulletproof option at least while we wait for other desktop-level code editors to be available on iPhone.

It has many features it also provides support to local and remote connections, in this sense it works with Dropbox, (S)FTP as well as WebDAV. With this, you can also upload and download between local and remote connections. Now, when it comes to local file access you can have access to files through any web browser. In the end, we would like to add that it comes with desktop-grade distraction-free editing.

Xcode – The defacto standard of IDEs 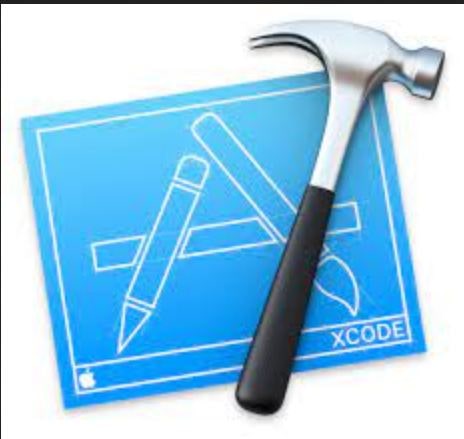 This is great for iOS application development which features automatic completions and a full syntax highlighting for Swift. It has integration with Cocoa Touch Framework. It carries an assistant button through which you can split editors into primary work documents and assistant editors. Although this can’t be used fully on the mobile, you can launch it on your Mac and access it via a remote desktop session from your iPhone using an RDP client.

It comes with an integrated interface builder which makes it simple to prototype a full user interface without defining any code. Version 8 includes all to make beautiful applications for Mac, Apple Watch and Apple TV. To be honest this is a quicker version of IDE which comes with the new editor extensions which can be used to fully customize the coding experience.

This is a programming editor for Mac originally that is quite easy to use however, now works on iPhone too. It provides flexibility and versatility which supports different languages. Being rich in features it is light in weight, free form clutters and much more. For programming languages, it supports IDE-level code completion including documentation snippets, tab-selectable placeholders and much more.

It has been designed and built primarily on the approach that any developer can run their code in any language instantly. It runs code in over 20+ different languages.

Some noticeable Code Runner features are:

Do you code on your iPhone?

We are seriously curious to know, do you write code on your iPhone when you are outside? Nonetheless, these 7 free coding apps for iPhone will give you the ability to write and edit code while you are on the move. I must say though you should try them on a “Max” version of an iPhone instead of the standard so you have more screen real estate.

Can you code languages such as Python and C/C++ on an iPhone?

Yes, you can code Python, C and C++ on iPhone. However, you will be limited to what extent you can use the features these programming languages have to provide.

Is iPhone a good device to code on?

No, the iPhone is not made specifically for being used as a coding device. There are other alternatives such as Macbooks and powerful laptops running Windows.

Do I have to buy an app to code on my iPhone?

There are free coding apps available including Swift Playgrounds and Koder that you can use. There are paid apps too for Python, an example is Pythonista but it has added features such as allowing you to use Matplotlib and NumPy library.

6 Python Programming Books You Must Read To Master Code

How to learn Python faster as a beginner? (9 tips to get up and running)